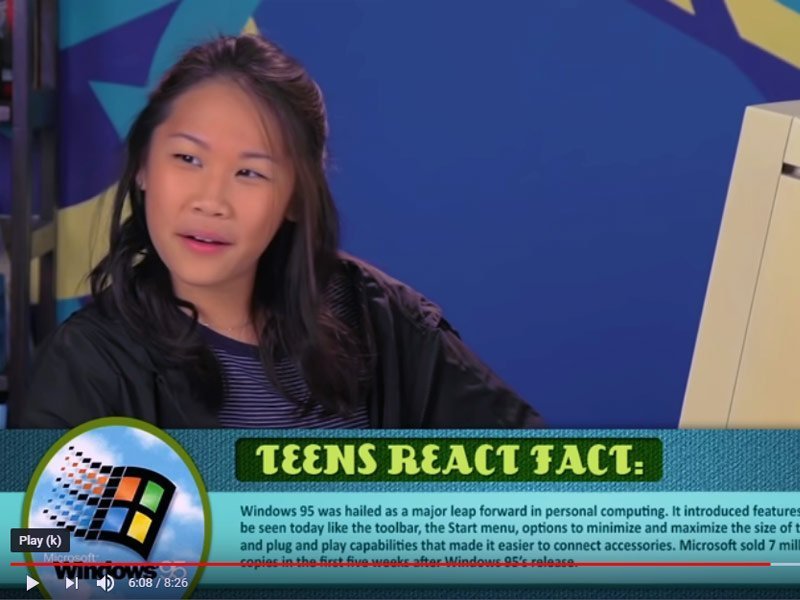 Teenagers react to Windows 95, cannot imagine what their elders endured

The majority of teenagers alive today weren’t alive in the 90s, meaning the oldest version of Windows they’re likely to be familiar with is Windows XP.

If that tidbit makes you feel old, you might not want to watch the latest React video from Fine Brothers Entertainment, in which a bunch of teenagers are exposed to the wonders of mid-90s computing and Windows 95 for the first time in their lives. They’re not impressed.

It starts with first impressions.

“The fact that the monitor is bigger than the actual computer itself says a lot” said Daniel, 17 years old, who is young enough to only have vague memories of monitors and TVs that aren’t flat.

“I’ve no clue what year this is from, but I feel like it was before the year I was born,” said Geneva, age 18, after seeing the mid-90s Dell. Her math checks out.

The design flaws we all got used to are evident right away. When asked to turn on the computer, everyone hit the big button on the monitor and waited, something we all probably remember doing at some point. When the computer was turned on, the reactions kept coming.

“I don’t think I’ve ever heard a computer make these sounds before in my life,” said Morgan, age 19, making anyone who felt nostalgic upon hearing the floppy drive click instantly feel 10 years older.

Then the teens waited for the BIOS screen to go away.

“This is taking a while,” said Karan Brar, reminding the entire planet what life was like back in ancient times when…